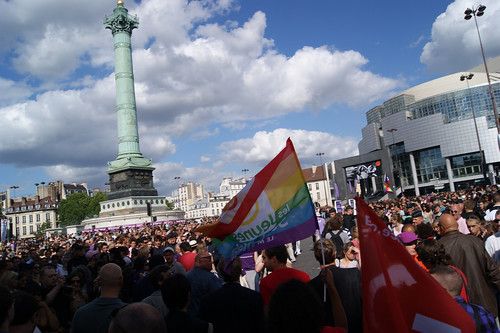 Pride in France has officially begun! As of last weekend, the official LGBT Pride manifestations and parades started in Angers. Pride activities take place in a different major city each weekend from now until July 7th, affording many opportunities to participate.

In Paris, the parade starts at place du 18 juin 1940, right in front of the Montparnasse train station, and winds its way up to Bastille, which is appropriate considering that the Bastille played host to yet another manifestation: the French Revolution.

The parade leaves at 2pm, though many arrive earlier to get the party started. The spirit of Pride in Paris is much like in any other city, with the added bonus of passing many famous Parisian monuments, like the Luxembourg Gardens and Notre-Dame, along the way. There are also lots of pauses to get wet in some of Paris’ famous fountains (if the weather is amenable, that is)!