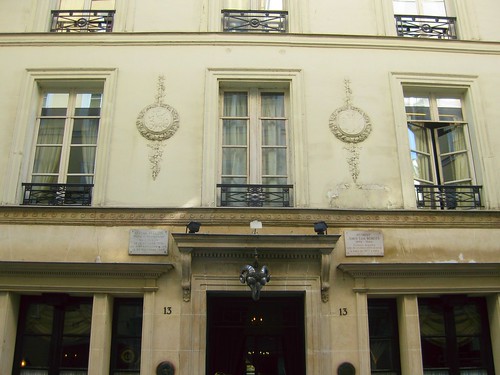 Oscar Wilde may have been of Irish birth, but his heart lay in Paris. True Wilde fans will love discovering his version of the City of Lights.

Wilde, like other writers of his time, frequented cafés, where thinkers gathered to eat, drink and talk. One of Wilde’s favorites was Café de la Paix, which still stands today. Their claim to fame is Wilde’s witnessing of a strange phenomenon, the apparition of a golden angel in the middle of the square. This trick of the light was actually a reflection of the angel perched atop the Opera in the morning mist. Visit the café yourself, and maybe you’ll see the angel too!

Where He Died – L’Hôtel

Formerly called the Hôtel de l’Alsace, this 6th arrondissement hotel was where Oscar Wilde spent his last waking moments; he lived there for several months, famously claiming to “live beyond his means.” Today, the hotel still lives up to the late 19th-century lush and glamourous atmosphere of the original hotel; the gastronomic restaurant in the lobby is a must-visit, for its beautiful dining room and incredible food.

Where He Now Lies – Père Lachaise

Oscar Wilde now lies in Père Lachaise cemetery, in a tomb designed by modernist sculptor Jacob Epstein: a flying Assyrian-style angel. The angel’s genitals were famously cut off and stolen; the replacement bronze genitals are rumored to be serving as a paperweight in the Père Lachaise office. Visitors bestowed lipsticked kisses on the grave until recently, when a glass barrier was put up to shield the tomb from the kisses, which apparently wear away the stone.