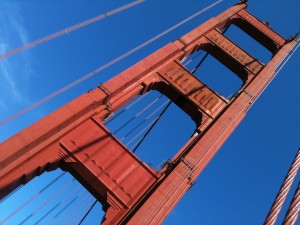 “People who write big checks get what they want. And I don’t just mean respect.” -Anonymous

Can someone be unwittingly influenced by money? If they’re not paying attention, yes.

To explore the raw possibility of being and becoming, perhaps here lies the answer to the riddle of The Universe. Creation is The Big Enchilada. There may be Creation Myth, but, there is also Creation Fact.

The other-worldly fog begins to form around the TransAmerica building. A cable car clanks to the sound of empty streets. A florists opens his stand on the sidewalk in front of the Macy’s Men’s Building. That white lattice, almost from another dimension, clothed the peninsula. The towers of the Golden Gate, rising above the span to Marin, could be seen that morning, yet again, as in so many classic photos. And, the Bay was not merely a repository of water, but of increasing amounts of light.

The alchemy of dawn; the magic ether we call sky; the end result of randomness; all the elements of Day are here yet again this morning, and marvelously, the goddess we call Sun.

Randy started his morning early enough at the investment firm, but, left earlier than he should have for his lunch break which he would spend at the gym across the street.

Maintaining his musculature and physique were his other career, much as the clients he would serve threw their essence into yachting or golf.

Somehow every day presented itself as… the wonder of becoming…and of possibility.

All that matters is in the present moment, he reminded himself. The music of the Universe cannot be heard in a dwindling yesterday, nor a forever receding tomorrow. Listen Now. Hear the Present.

Better than you can imagine; A scale-able business model for entry-level investors; dividends increasing exponentially; serve a client-base.

In this present moment we hear the clank of downward-moving weights on cables.

The Kaleidoscopic images of men’s torsos reflected in the several facing mirrors, combines with the images of Downtown.

The clear liquid of a magenta energy drink produces droplets of condensation. Randy sweated as he pulled, and the weights on the machine rose again. With this last bit of effort, they were released.

At work, his commissions were down, due to a decrease in client load. However, like a Phoenix from the ashes, he would rise. He would recover again from the disappointing sales figures. Although, he was a mere temp. These were weighty concerns for a temp, the numbers game I mean to say.

His quadriceps, released of all tension after this third set, bulged magnificently beneath the running shorts. This would be the last of the lower-body workout on this, potentially last, lunch break.

But, this Phoenix, this investment professional, had an ace up his sleeve. The real secret is that productivity doesn’t happen at the office.

He decided to skip the showers because he was already late for returning to work. Later, even than is customary for him. He would change back into his suit and tie in his office. Not a corner office, to be sure -it wasn’t really even his office -he thought with chagrin.

There was the brisk cold from the sweat evaporating from his taut skin as he simultaneously put on a flimsy old tank top and walked out into the stiff breeze in the environs of California Street. The building he was temping in was directly across the street, and, nearby, the iconic TransAmerica building in its Pyramidal whiteness. As he approached the early-twentieth century facade, Randy’s present-ness in the moment was interrupted by the ringing of his cell phone in the duffle bag swung over his ripped shoulder. It would be a call from the past, really, a call from the dead, how very Hitchcock.

Amateur writer, pianist, denizen of Houston and part-time GLBT activist. Email: james.legare.CEO@jameslegare.us -> I would be delighted to hear from you!