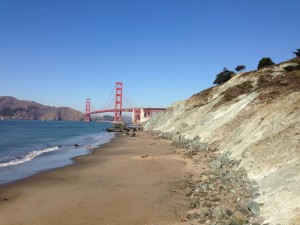 When I awoke the next morning, Rod was nowhere to be found. The San Francisco Bay was a blue mirror of infinity. Bulbous clouds caressed the sky with white tendrils. A regatta busied itself, triangular sails lost in a plane of blue, penetrating in its deepness.

I became aware of my sore body surrounded by troubled silk. And the silk rustled with the tiny grains of sand some of which fell to the floor and made a ssshhhhh sound, meeting the hardwood.

And, there was the painting. Still, she tantalized me, mysterious her. I took one last glance at her creamy features.

Spent candles were all around.

Then I noticed that my ring was gone. I was completely nude; my clothes in a pile under the window. Not even jewelry covered my body.

After dressing I went downstairs. I noticed a gardener trimming the hedges through a large picture window. There was no car in the driveway, however, there was a note by the coffee maker which caught my eye: “Sorry for taking the ring, but, I promise to give it back. B.T.W. Have some coffee.”

The carafe was filled with the black elixir. I would wonder later why I hadn’t noticed the scent of coffee. Perhaps it was competing with the scent of warm croissants and diminishing incense. It could have been due to the window, strangely left open. The fresh Bay breeze entered the open-concept floor plan of this newly refurbished Marina home. I spread the jam from the refrigerator onto the croissant with a silver knife and sated my hunger, yet again.

Later in the afternoon of that same day, I would be admiring the downward stream of golden light of the diminishing goodness. At a well-known cafe nestled at Noe and Market, the good-weather-turning bad was all too evident through what could only be characterized as walls of glass.

I was enjoying the illusions of hexagons, in this one-story building designed for those who want to be seen. But, Hexagon was not the shape before me now. This spot was atrium-esque, if that will ever be a word. The glass panes afforded a view of well-to-do joggers and bicyclists walking and riding their bikes, the trees of Noe and a new condominium building across Market designed to meet an acute triangle, and enjoy the experience.

Mounted above a two-story nondescript building which housed a Radio Shack not long ago, the out-sized image on a billboard advertisement faced Twin Peaks.

The clientele of the cafe presented itself with a lack of bubble-heads from the Financial District. We were too many blocks from the Ferry. Bar rags littered the chairs and tables.

The antique street cars of the F-line glinting past pay their obeisance to tourists waiting with passes. A jogger runs in place while the walk-signal changes and the clouds become brooding, cutting the tumbling light as they pass, too. The hills will assume a gray mask.

I sat opposite Randy, a friend who temps downtown: An Aquarium Existence in his words. He is one of the smaller fish of the finance industry: the people who make money off your money, the residual worth in a rentier’s market. Dividends divided.

He gets chump change.

“Someday we will all live in cyberspace.” -mused Randy. He had his philosophical bouts. I drank more of my afternoon beer.

“…and you didn’t get to say goodbye to your Angel of Mystery when you woke up in his bed this morning?” -more a statement then question from the Rand, as I like to call Randy.

I nodded back to the present, distracted as I often am by an above average jogger.

Randy works near the TransAmerica Building at the edge where the Financial District meets the long climb of Colombus Street, that politically incorrect by-way. This would be a neighborhood with a Jack Kerouac Alley and where his spirit still lingers at a book store, the light of The City. And the TransAmerica building has a light near its peak. Just watch it at night.

The Beat Generation, my Beatnik pal, struggled to live outside the Aquarium existence, and one could argue, paved the way for the Psychedelics.

Back at the cafe, I could admire the hills from this vantage, with a table in front of a window. The place was all windows, as can easily be seen. I was surrounded by the toned clientele, not a person who wasn’t ripped.

“Have you launched your idea?” -I querried.

“Will consumers buy cold coffee ready-to-drink in a can.?”

“Do you have capital you want to invest?”

“Is that your pitch?”

“It’s a niche consumable, does well will focus groups, high profit-margin. International potential. Get in on the ground floor.”

“Let’s get something straight, sorry, bad expression. YOU are the investment. Not, what you are pitching. YOU are pitching YOU”

An artificial waterfall inside the cafe silently made the light more brilliant, even as it slowly faded in luster. Images became a smattering of colors in the mirror cleverly concealed behind the falling water. The passersby could see it through the glass walls from the street but hardly noticed. I took another drink.

Randy didn’t get a lot of work done. He wasn’t a marketing/investment genius. But, he had toned abs, which were showing under his shirt which stopped at a level above his navel, from spending his long lunch breaks at the gym Downtown.

The beer was delicious, cold as it met my lips. The memory of my morning was made even more lustrous by the encroaching grayness. A guttering candle seems to be made all the brighter.

Chapter 3: A Body of Evidence -Murder in SF

Amateur writer, pianist, denizen of Houston and part-time GLBT activist. Email: james.legare.CEO@jameslegare.us -> I would be delighted to hear from you!